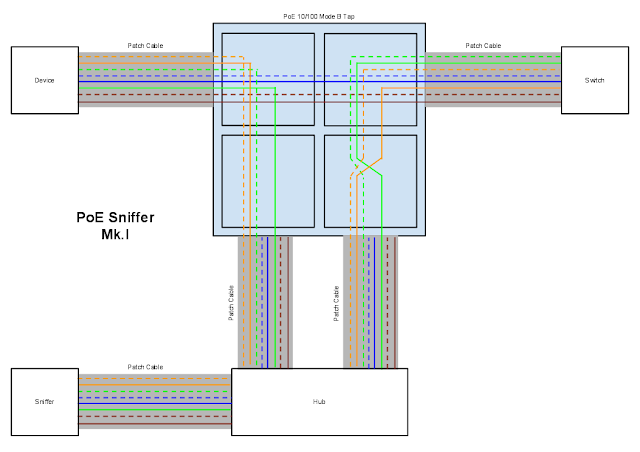 This project is to create a tap that allows a person to sniff a device attached to Power-over-Ethernet 802.3af Mode B (10/100 DC on Spares) cable. While I've seen many PoE implementations simply inject power onto the cable and later split it off, I've seen devices such as Avaya's VoIP phones have native PoE support built-in. Taping these lines have two concerns, the potential to damage equipment not designed for PoE, as well as making sure that the Device dependent on PoE is able to power up. Building a basic device isn't as complex as it sounds, all that is required is a basic four port wall jack and some crafty wiring.

I bought enough parts to make three, just encase I messed one up, and if I ended up with extra then I could make a standard passive tap. Grabbing the parts from the local hardware store, it should only cost $20 to make one. One thing I didn't buy was a punch down tool, as the rj45 jacks came with a little plastic punch down tool of their own. It's not as cool as the one I listed, but it got the job done. 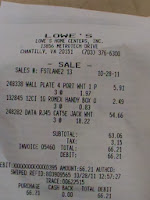 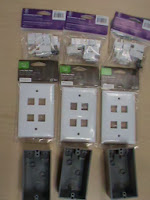 I cut about a foot of cat5 cable, then removed the outer jacket until I could pull the strands out. 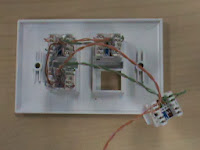 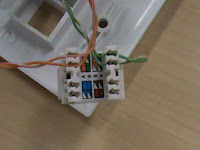 I don't have a lot of experience with electronics outside of high school, but this was a pretty easy project. If you've played a game of twister and can follow the diagram I've provided, you can fashion one of these in an hour. 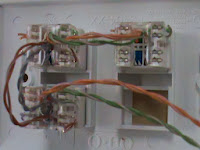 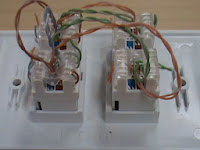 Don't worry about the slack, as you can see, it fits the work box easily and ends up being a tidy package. You could put one of these in a wall or cubical and it wouldn't look out of place. 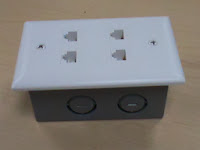 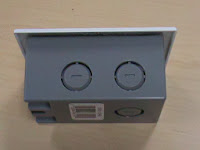 To label I wrote on it with dry erase marker and taped it over. 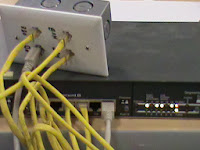 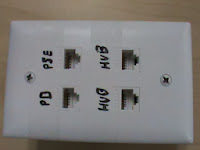 Sadly, we weren't able to test the PoE injectors as hoped this night, however we did use a hub's link lights to be sure that the Ethernet portion of the wiring was correct.

This model was donated to ReverseSpace

After I build this, I will probably expand to making a tap that detects all modes of PoE and reroute the power accordingly.
http://www.eetimes.com/design/communications-design/4009270/Making-the-Most-Out-of-802-3af

Posted by Eric Gragsone at 5:32 PM